The History of Kappa Delta Rho

In the Fall of 1904, Middlebury College had three fraternities on campus:  Chi Psi, Delta Kappa Epsilon, and Delta Upsilon. There also existed the Commons Club, a large neutral group of students.

On May 17, 1905, these ten met again in room 14 of Old Painter Hall as the Charter Members of the newly formed Kappa Delta Rho Fraternity.  They left school and did not publicly announce the formation of the new Fraternity until the fall.

Kimball, Walch & Ratti met and drafted a ritual, open motto, and a constitution 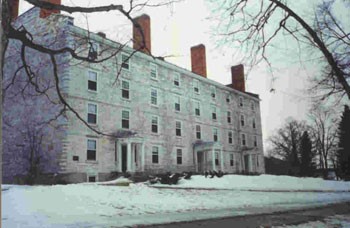 During the first year, a representative from Delta Tau Delta met with KDR to discuss absorbing KDR into DTD.  The Founders had expressed some interest in joining a national fraternity, but some decided against this idea and in Kimball’s words: “We had decided that we preferred ‘to paddle our own canoe and took no further action in the matter.”

Beecher and Coates did not return to Middlebury for the next year.  The Fraternity found support from Henry Harvey, a faculty member at Middlebury, who helped and assisted the chapter and became their first Honorary member.

The new fraternity did not have pledge classes or pledges but new members were part of delegations.

In 1909, the first issue of The Scroll (to become the Quill and Scroll) with 30 copies for undergraduates, alumni and honorary members was published.

By 1913, the fraternity was attracting larger delegations of 10-15 men. 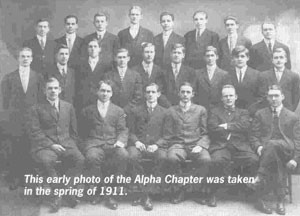 Beta Chapter at Cornell University was founded on May 24, 1913, largely through the efforts of Harold A. Severy, Alpha ’09, then a graduate student at Cornell.

The Beta men were a strong and enthusiastic group and assisted in the formation of Gamma Chapter at New York State College for Teachers (now SUNY Albany) on June 10, 1915 and with Delta Chapter at Colgate University.

John F. Hough, Alpha ’14 was then a graduate student at Colgate and helped found Delta on February 22, 1917.  Delta’s faculty advisor, Dr. Frank C. Ewart, was made an Honorary Brother and later became National President.  He helped Delta Chapter financially, purchased a house for the fraternity, and helped develop the National Fraternity.

Publication of The Scroll was suspended.

Alumni helped to sustain fraternity through the end of the war.  After the war, chapter houses reopened and growth continued.

In 1921, KDR became a Junior Member of the North-American Interfraternity Conference (NIC) and in 1929 a Senior Member.

KDR was not immune to the economic effects of the depression.  All but two chapters were sustained (Butler University and Carnegie Tech), due in large part to Alumni support.

At the 1932 Convention, the constitution and general structure changed to begin the process of moving towards incorporation.

In 1939, one new chapter, Upsilon Chapter was chartered at Fresno State College.

The Quill and Scroll continued publication and eventually included stories from the front and addresses of brothers overseas, resulting in reunions of brothers and chapters on the battlefield.

The 1946 Convention focused on restoration of KDR’s chapters and fifteen (15) reopened that fall.

In 1956, KDR celebrated her Semi-Centennial Celebration.  The 45th Annual Convention was held in Breadloaf, Vermont and on September 1, 1956, a memorial plaque was unveiled and dedicated at Old Painter Hall on Middlebury’s campus. 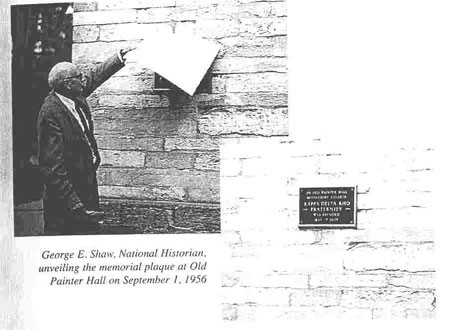 On November 12, 1960, the KDR Trust [later KDR Foundation] formed, to promote educational, charitable, and literary purposes for the National Fraternity, her chapters, and all KDR members.

During the Vietnam Conflict, many chapters closed and membership declined due to an anti-establishment sentiment on college campuses.

In 1980, the National Board of Directors establishes a new expansion policy.  A renewed interest in Greek Life on campuses across the country and this new policy resulted in the chartering of several new chapters, as well as, reactivation of several closed chapters.

In the mid 1980’s, the National Office located at Greensburg, PA.

Robert D. Lynd, Iota ’67, National President from 1974-1988 became member of the NIC Board of Directors, eventually becoming President in 1993.

Risk Management and poor image issues resulted in problems for all fraternities and the closing of Greek Systems at several college and universities due to risk and image issues.  In 1983, Xi chapter is closed when Colby College eliminates their entire Greek system.

All-Male institutions come under close scrutiny, resulting in administrations at several colleges deciding that all campus organizations would be coeducational.  Middlebury College enforces this policy in 1989, causing Alpha Chapter to make a choice.

The Brothers of Alpha decided it was a better decision to accept women into their brotherhood that to cease to exist. 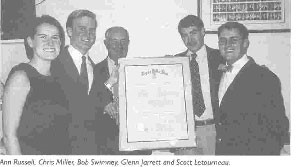 Alpha Chapter pledged and initiated their first female members in 1989 and this resulted in the loss of affiliation for Alpha Chapter with the National Fraternity, until a solution could be implemented.

In 1997, after years of proposals and debating, a proposal to create the Kappa Delta Rho Society allowing KDR to exist at Middlebury and allowing the National fraternity to maintain her identity as a male fraternal organization.

This was only allowed at Alpha Chapter.  The KDR Society at Middlebury received its charter in October 2000 from Grand Worthy Consul Robert L. Swinney, Sigma ‘58.

KDR is the only Greek organization at Middlebury with a national affiliation. 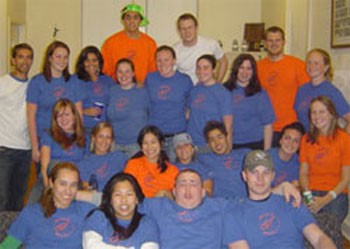 The Centennial year of 2005 was celebrated at the 2005 Convention in Baltimore, Maryland, where the Ten Founders were honored posthumously with induction into the Ordo Honoris by Grand Consul Joshua L. Smith, Alpha Beta ’93.

KDR continues to develop new advancements in chapter operations, educational programming, and long term member development including implementation of the KDR Wilderness Institute and The Path membership development programs in 2007. The KDR Wilderness Program was dropped after 2011 along with regional conclaves in favor of an annual Consuls’ Academy each January for newly elected chapter presidents.

In 2007, Joseph Rosenberg, Xi Alpha ’96, was hired as the new Executive Director of Kappa Delta Rho.